The Ride Illinois community is mourning the tragic death of friend and Ride Illinois Board member, Ramón Escapa. Ramón and his wife, Michelle, were biking on a rural road near their home in Rushville, IL on Sunday June 19th. The driver of a pickup truck struck Ramón from behind and he did not survive. Information about the crash can be found in this article.

Ramón was a deeply-valued and beloved member of our organization and his community. He was an avid bicyclist and determined bike advocate. In addition to serving on the Ride Illinois Board of Directors for our nonprofit advocacy organization since 2019, Ramón was the Chair of the Governance & Nominating committee. In the past few months, Ramón led important efforts to revamp our bylaws, develop a privacy policy, and interview candidates for open positions on the Board.

Cynthia Hoyle, Ride Illinois Board president, said “I had the opportunity to work closely with Ramón on our Governance & Nominating Committee. He was an amazing person, hard-working, smart, funny, and a huge supporter of bicycling. Our hearts are broken and our thoughts are with his family.”

“I’ll miss my constructive conversations with Ramón about advocacy, education and many other topics, his sense of humor, and his not-so-subtle digs at the volume of email I sent to our board”, said Dave Simmons, executive director of Ride Illinois. “Our current focus is on Ramón’s family, though we will not allow his death to become just another statistic.”

Trevor Cottle, fellow Ride Illinois board member and Ramón’s dear friend said, “The small but active biking community in west central Illinois is so saddened by the loss of our friend, Ramón. His enthusiasm for biking, the love for his community and biting wit is irreplaceable. But, his legacy and influence will continue to inspire others to ride by making biking safe and accessible for anyone. As Ramón used to always say, “We’ll make it happen!”

In addition to his service to people who ride bikes in Illinois, Ramón was an engaged and active public servant. He served as the Eighth Circuit County Judge covering Adams, Brown, Calhoun, Mason, Menard, Pike, and Schuyler counties. He oversaw many court cases in Quincy during his time as a judge. He was an active member of the National Guard. Prior to being elected, Ramón served as a police officer in Beardstown and as a Schuyler County deputy. He had also been an English as a Second language and bilingual teacher in Beardstown. He was admitted to the Illinois Bar in 2009, and before his election as state’s attorney, Escapa was a partner at the law firm of Lucie, Scalf, Escapa and Graham in Macomb.

We are devastated by Ramón’s death and will miss him dearly. Ride Illinois will support Ramón’s wife, four children, and family as they cope with their incredible loss.

A Few Photos of Ramón 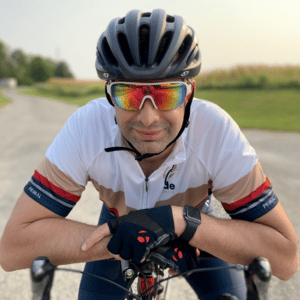 Ramón in his Ride Illinois jersey 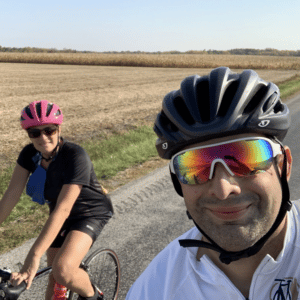 Ramón and his wife, Michelle 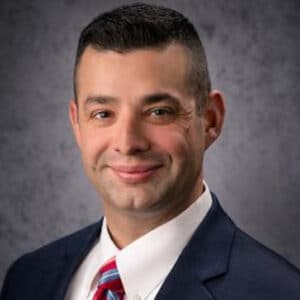 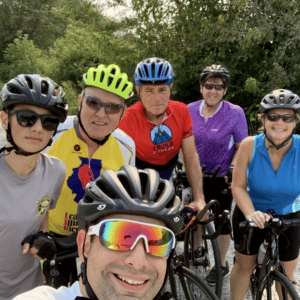 Photos used with permission from the Escapa family.

As listed on the Worthington Funeral Home website on June 20, 2022:

He was a 1998 graduate of Rushville High School. He served in the U.S. Army National Guard for 12 years currently serving as a JAG Officer. Ramon was a Schuyler County Sheriff’s Deputy and a Beardstown Police Officer. He taught English as a second language in Beardstown, IL before joining the Illinois Bar in 2009. Before his election as Schuyler Co. States Attorney he was a partner in the law firm of Lucie, Scalf, Escapa & Graham in Macomb, IL.

He was currently a judge in the Eighth Judicial Circuit. Ramón was a member of the St. Rose of Lima Catholic Church in Rushville. He was also a member of Ride Illinois, Schuyler County 22 Club, Knights of Columbus, Rushville Masonic Lodge #9, Illinois Bar Association and Illinois Latino’s Judges Association.

A private family service will be held at a later date. The family will receive friends from 3:00 to 7:00 p.m. Thursday, June 23, 2022 at Worthington Funeral Home. Masonic services are scheduled for 7:30 p.m. with Military Honors to follow by Schuyler American Legion Post #4 and a U. S. Army Honors Detail.

In lieu of flowers memorials may be given to Ride Illinois or The Ramón Escapa Scholarship Fund for a deserving member of the Community c/o Schuyler Co. Community Foundation at Rushville State Bank.