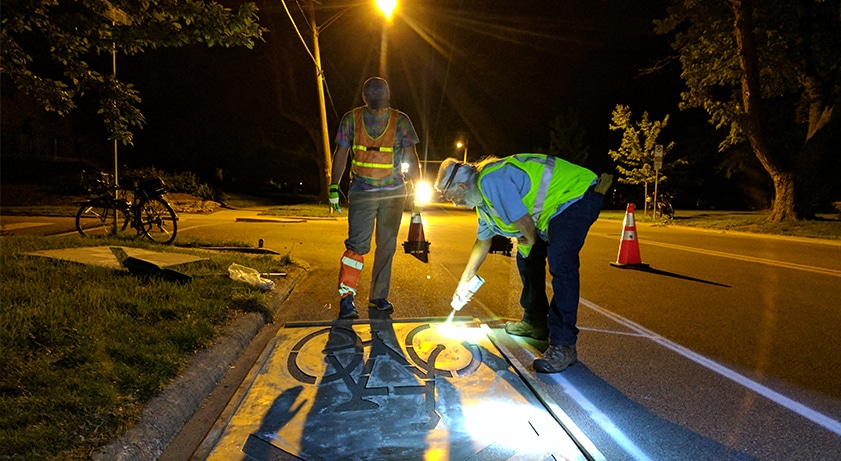 Ride Illinois produced a Bicycle Master Plan for the City of Bloomington in 2015. Michael Gorman, board member of the local advocacy organization Bike BloNo, tells the story of how local advocates added a major street to that plan.

Bloomington, Illinois, hadn’t done much of anything to accommodate bikes on city streets. It was the summer of 2013 and a new mayor, Tari Renner, had just been elected on a vision of, among other things, safer streets. After installing a couple blocks of bike lanes and connecting Illinois Wesleyan University with Downtown Bloomington via sharrows, it was time to take the next big step: creating a citywide Bicycle Master Plan.

Bloomington’s smaller twin city, Normal, had hired Alta Planning + Design to create this kind of plan back in 2008-09, so there was some local precedent. Normal’s plan included accommodations on some of the busiest streets in town and involved innovative designs such as bicycle boulevards, protected bike lanes, and even a cycletrack on a state road. This was a very progressive document for Central Illinois, especially back when it was adopted in 2009.

Bloomington wasn’t ready to take such a big leap. They also didn’t want a plan that looked great on paper but would just sit on a shelf and never be implemented. With the advice of local bike advocates, the city entered into a contract with Ride Illinois to create a plan. After receiving survey responses from more than 1,000 local residents and specific route requests from roughly 100 people, one thing was clear: cyclists wanted safer accommodations on big streets.

The number-two requested street was Washington Street. Washington Street runs east-west almost the whole way through Bloomington, dead-ending at the airport. It connects the historically low-income west side with downtown, the main branch of the Constitution Trail, State Farm Insurance corporate headquarters, and one of two local hospitals. If you’re trying to navigate Bloomington, it’s hard to avoid Washington Street.

For the last twenty years or so, Bloomington’s Public Works Department has been working to add vehicle capacity on Washington Street. Ultimately, their goal has been to make it a four-lane artery through the entire city. Former comprehensive plans called for growth on the community’s far west side, and Washington would have been a critical connection between this area of greenfield development and the existing destinations along the corridor. This west-side growth has never substantially materialized, but it was still planned on paper – and the engineers believed a four-lane arterial would be necessary to accommodate this growth. (The current comprehensive plan, which expressly calls for infill development, was adopted later.)

When Ride Illinois read the public input requesting bike lanes on Washington Street, they determined this could be feasible on much of the east side.  However, since the City had other long-term ideas for Washington, the final bike plan instead used less-direct neighborhood streets to head east-west through this area of town.  For reference, bike lanes were noted as an “other option”, should those ideas change.

Fast-forward to October 2015. The plan, sans Washington Street, has been adopted by City Council. The local advocacy group I co-founded, Bike BloNo, holds a membership meeting to figure out which projects in the plan we should push to get done first. We break up into four groups, three of which – even though it’s not in the document we gave them – individually asked us to work on Washington Street. We knew it’d be an uphill battle, but we accepted the challenge.

The first step was figuring out what to ask for. I measured the street, block by block, using a cheap laser distance measurer. Then I went online and used the free tool StreetMix.net to create pretty cross-sections we could show the public. Stepping out of the gate with professional-looking renderings helps to sell any project.

We then met with neighborhood stakeholders along the corridor. It turned out that one neighborhood association, in a wealthy area of town, had originally formed a couple of decades ago specifically to oppose the City’s plan to widen the street through their neighborhood. We still had to convince them of the safety benefits of bike lanes, but we were able to show them that we could do everything we were talking about without changing the pavement width at all, even if we kept parking on one side of the street. That was huge.

In September 2016, two Public Works staff members attended a NACTO Training Seminar as part of Ride Illinois’ Illinois Bike Summit. From the seminar, they learned how bike lanes can be accommodated on busy streets, often without any adverse impacts on traffic flow, usually with even better safety for motorists than by building streets the usual way. They were ready to re-envision Washington Street.

I started having monthly meetings with Public Works to talk details. We worked through issues like loading zones for individual businesses, parking for tour buses at a concert venue, specific locations for turn lanes, and the like. In the end, after about six months of back-and-forth discussions, we were ready to present the idea to the public as a proposed amendment to the Bicycle Master Plan.

Before holding public meetings, Bike BloNo wanted to show the community – in a real, tangible way – what we were proposing. We’d seen other communities implement pop-up bike lanes and we wanted to give it a shot. Public Works loved the idea (even though it was completely unprecedented in the community), so we worked with them on logistical issues; they provided an arrow board truck with a driver, hundreds of orange traffic cones, and a sharrow stencil. They even put up changeable message boards to inform the public about what was going on.

At 11pm on a Sunday night, thirteen Bike BloNo volunteers (including three neighborhood residents) got to work. We had purchased thirty cans of white spray-chalk and an applicator to keep the lines straight, and we brought safety vests, lights, brooms, two-way radios, and a chalk line. By 3am, we’d installed a half-mile long bike lane. Finally, we’d taken renderings on paper and turned them into reality – if only for a couple of weeks. It only cost us about $500, but the feedback we received was invaluable.

And, boy, did we receive feedback. 240 people provided official written comments – more than Public Works believes they’ve received about a lane reconfiguration ever before. There were newspaper stories, radio and TV coverage, letters to the editor, vigorous debate on social media… One homeowner even created a giant yard sign to oppose the project. In the end, roughly two-thirds of the official feedback was in favor of the project – and a City Council that is often said to disagree on whether or not the sky is blue voted unanimously in favor of the proposal. We’ll see the first stretch painted later this summer.

There are Washington Streets all around the state and across the country – both literally and figuratively. Once we started taking measurements and fleshing out the proposal, it really wasn’t very difficult to convince people that this was possible. I’d encourage concerned citizens in every community to look at their biggest, most dangerous streets and come up with proposals to make them safer for everyone. All it takes is one person to start the conversation!