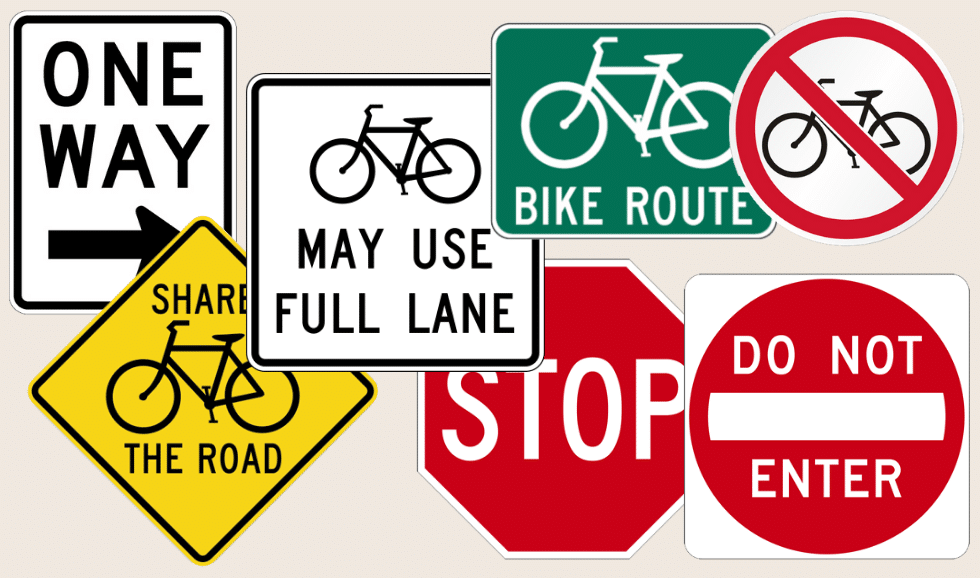 This page includes a summary of the laws that pertain to bicyclists in Illinois. Ride Illinois encourages bicyclists to follow the laws (aka Rules of the Road) on every ride. Doing so will increase safety on Illinois roads!

The numbers in brackets refer to Article XV of the Illinois Vehicle Code.

Traffic laws apply to persons riding bicycles. Bicyclists riding on a highway are granted all of the rights (including right-of-way Article IX) and are subject to all of the duties applicable to the driver of a vehicle, with certain exceptions. [5/11-1502]

When riding on roadways and bicycle paths at less than normal traffic speed, ride as close as practicable and safe to the right-hand curb or edge of roadway except:

Riding two abreast is permitted as long as the normal and reasonable movement of traffic is not impeded.

Riding more than two abreast is prohibited except on paths or parts of roadways set aside for the exclusive use of bicycles. [5/11-1505.1]

Riding on a Shoulder

For vehicular-style left turns, proceed as if driving a vehicle, moving to the left lane or the left side of a single lane prior to the intersection. [5/11-801]

For pedestrian-style left-turns, ride near the right side of the roadway, cross the intersecting roadway, stop (as much as practicable out of the way of traffic), yield to any traffic and proceed in the new direction, while obeying any official traffic control device or police officer. [5/11-1510]

Signal not less than the last 100 feet before the turn, and while the bicycle is stopped waiting to turn. Signals need not be given continuously if the hand is needed in the control or operation of the bicycle. [5/11-1511]

“Dead Red” Stoplight (In all towns except for Chicago)

A bicyclist, stopped at a red light which fails to detect the bike and change to green within a reasonable period of time not less than 120 seconds, shall have the right to proceed, after yielding right of way to oncoming traffic facing a green signal, subject to the rules applicable after making a stop at a stop sign. [5/11-306(c)3.5]

Passing on the Right

The law requiring at least eight feet width for two-wheeled vehicles to pass on the right does not apply to devices propelled by human power. [5/11-704(b)]

Use of Sidewalks (and Crossing Right-of-Way)

If no traffic signals are in place, vehicle drivers shall stop and yield the right-of-way to peds within marked or unmarked crosswalks in (or dangerously close to) the roadway half upon which the vehicle is traveling—but pedestrians should not enter the path of a moving vehicle so closely to be an immediate hazard. [5/11-1002(a,b)]

Operators must be at least 16 years of age. Low-speed gas bikes may not be operated on a sidewalk, or at speeds over 20mph on a road. All other bicycle laws apply. [5/11-1516]

These may be operated on roads but not on sidewalks. Bicycle paths may be used except where prohibited by the maintaining agency. Operators of Class 3 electric bikes must be at least 16 years of age. All other bicycle laws apply. [5/11-1517]

No bicyclist shall carry any package, bundle or article which prevents the use of both hands in the control and operation of the bike. At least one hand shall be kept on the handlebars at all times. [5/11-1506]

Two or More on a Bike

Bicycles shall not be used to carry more persons at one time than the number for which it is designed and equipped, except an adult rider may carry a child securely attached to his person in a backpack or sling. [5/11-1503]

Lights and Other Equipment on Bicycles

No person riding on a bicycle shall attach the same or himself to any vehicle upon a road. [5/11-1504]

A motorist overtaking a bicycle shall leave a safe distance, but not less than three feet, when passing the bike and shall maintain that distance until safely past the overtaken bicycle. [5/11-703(d)]

A motorist may pass a bike in a no-passing zone when: (1) the bike’s speed is less than half of the speed limit; (2) the driver is able to pass without exceeding the speed limit; and (3) there is sufficient distance ahead on the left side to pass safely. [5/11-703(d-5)]

A motorist shall not, in a reckless manner, drive unnecessarily close to, toward, or near a bicyclist. Depending on whether great bodily harm results, this is a Class A misdemeanor or a Class 3 Felony. [5/11-703(e,f)]