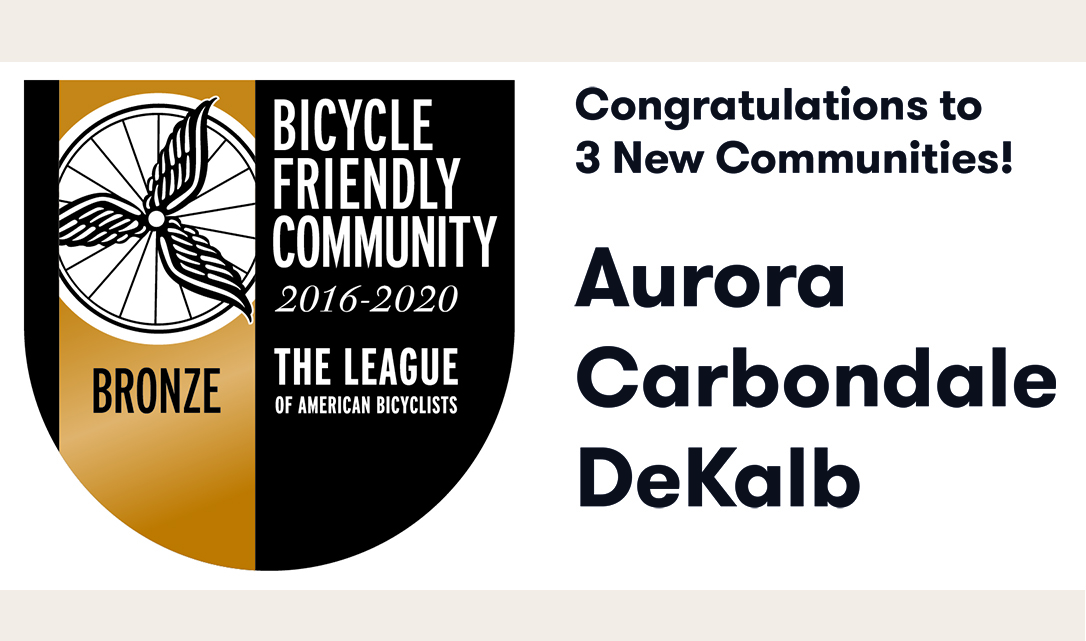 The application process for becoming a BFC or securing a higher level designation is rigorous and successful communities have a mixture of determined citizen advocates, visionary leaders, and responsive staff each doing their parts to build a Bicycle Friendly Community for all.

“Ride Illinois applauds our state’s Bicycle Friendly Communities for their well-deserved awards!” said Ride Illinois Chief Programs Officer Ed Barsotti. “Through bicycle planning, BFC application assistance, and other collaborative work, we have played a role in each of these communities. We look forward to helping many other Illinois cities reach Bronze and then aim for higher levels!”

“We are excited to see the number of applications grow this year, and gratified to see our total number of Bicycle Friendly Communities in Illinois jump to 15,” said Ride Illinois Executive Director Tania Sebastian. “It’s also incredible to see the geographic diversity of communities that applied – from urban to suburban to rural – and their commitment to making bicycling a safe and convenient option for both transportation and recreation. This growth and diversity is a reflection of our progress in our mission to make biking better for everyone throughout the state.”

Here is a breakdown of our BFCs and Honorable Mentions with links to their report cards and information about Ride Illinois’ involvement with each community:

Aurora – New Bronze Level – Report Card
Ride Illinois has had a long history of involvement with this city’s bike friendly initiatives. We’ve provided guidance and technical expertise on bicycling issues, and led efforts behind the Bike Friendly Community application and formation of the city’s Bicycle and Pedestrian Advisory Committee. We have also assisted with grant applications, creation of bike maps, safety education, and more.

Carbondale – New Bronze Level – Report Card
Ride Illinois worked as a sub-consultant on their 2016 bike plan; some of which has already been implemented. (link to story) We also advised the city on strategies and priority action items they should undertake in seeking this year’s Bike Friendly Community designation.

Schaumburg – Renewed Bronze Level – Report Card
Schaumburg was the first town in Illinois to receive BFC designation, and has long been committed to maintaining their bicycle friendliness. We produced a Bike to Metra guide for Schaumburg in 2013 to encourage bicycle commuting. Schaumburg has also participated in our annual Mayor’s Bike Safety Challenge, and joined our Illinois delegation at the National Bike Summit in D.C. last year.

Evanston – Renewed Silver Level – Report Card
As a Silver level BFC, Evanston is among the top bicycle-friendly communities in our state. They’ve participated in our annual Mayor’s Bike Safety Challenge and encourage the use of BikeSafetyQuiz.com as an educational tool in their community.

Highland Park – Honorable Mention – Report Card
Recently, Ride Illinois is currently working with Highland Park on the installation of dozens of new “State Law – 3 Feet Minimum to Pass Bicyclists” signs for early 2017. We’ve also created Bike-to-Metra guide, helped shape a ticket diversion program with the use of BikeSafetyQuiz.com, and helped them promote their involvement in our Mayor’s Bike Safety Challenge.

Springfield – Honorable Mention – Report Card
Ride Illinois was the bike planning consultant for Springfield’s overall bike plan in 2012. We have been advising on strategies and action items in their efforts to become a Bicycle Friendly Community since then.

Washington – Honorable Mention – Report Card
Over the past year, Ride Illinois has engaged with Washington’s Bicycle Advisory Committee and advised on strategies and assisted action items in seeking BFC designation.

The League of American Bicyclists welcomed 26 new and 77 renewing Bicycle Friendly Communities throughout the US. This was the largest application round in the BFC program’s 13 year history. In total, 140 communities applied for recognition, a 62 percent increase from the previous largest round. There are now 404 BFCs in all 50 states.

Learn more about how Ride Illinois can assist your town in becoming a BFC. 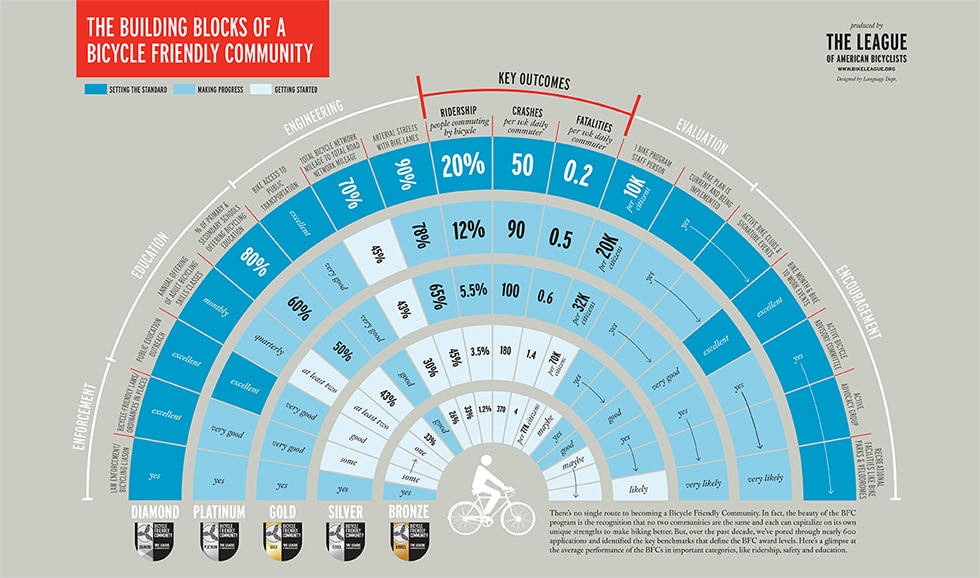